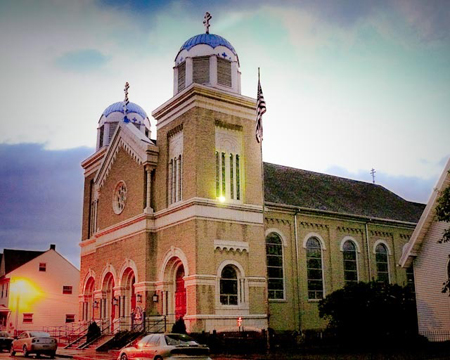 Welcome to Saint Michael The Archangel Orthodox Church. We are a parish of the Orthodox Christian Faith which was established on the day of Holy Pentecost in the Year 33 AD. Our parish community is a member of the American Carpatho-Russian Orthodox Diocese of the U.S.A. whose presiding bishop is His Grace, Bishop Gregory of Nyssa. The American Carpatho-Russian Orthodox Diocese is an autonomous diocese under the spiritual protection of the Ecumenical Patriarchate of Constantinople of which His All-Holiness, Ecumenical Patriarch Bartholomew I is the Primate.

A number of Slavic people, then part of the Austro-Hungarian Empire, emigrated to the Saint Clair, PA area in the early 1890's.  Having similar backgrounds from Carpatho-Russia, Czechoslovakia and Galicia, they shared a common dream -- a new way of life in the United States.  They found themselves, however, not knowing the English language and among the other immigrants who had settled here before them.  Nonetheless they banded together in Christian love and helped each other.

Saint Michael the Archangel Orthodox Church is located on North Nicholas Street in Saint Clair.  The current church stands on the site where the originalSaint Michael Orthodox Church stood until 1924.  This church was moved back and is the present day Saint Michael's Social Hall.  The present day church was designed by D.H. Grootenboer, Registered Architect, Pottsville, PA and constructed over a seven year period, dedicated in 1932.  The architecture of the church is a composite of Greek and Roman styles using Roman arches and Corinthian and Doric columns.  The two bell towers are painted blue.  The south tower contains three bells.  They are incribed Saint Michael, Saint Nicholas and Saint Andrew.